I don’t know what made me think of Eartha Kitt today.

Lando is still with us. He’s feeling quite comfortable here I think. Sammy seems to be getting along with him very well. They play, nap, play some more, nap. They’re certainly giving us lots of entertainment.

I haven’t been doing a lot of making lately. At this time of year, I like to be outside as much as possible when the weather is good. Some of that time is spent reading (while watching the antics of the dogs).  My reading list lately looks like this:

Goodness! I just realized making this list how many books I’ve read in the last month or so.

Here’s another look at our little Lando friend. 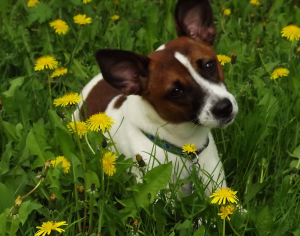 Last Friday night, while a vicious wind storm whipped the south end of the province we drove down the highway to Toronto to pick up a weary traveller. Orlando is about a year old and he had left a shelter in Texas and headed to Ontario along with about a half-dozen others, Jack Russell and Rat Terrier crosses, that had been slated for euthanisia. Some of the dogs had been refugees from Hurricane Harvey. Others, like Orlando, were down on their luck and clearly running out of options.

Luckily, the Ontario Rat and Jack Russell Terriers were able to secure them, and Thursday morning, they began the long journey north on what’s been described as the underdog railway. The pups were handed off about 12 times before becoming Canadians and finally reaching their destination. On this side of the border, several families opened their homes to foster these dogs until permanent homes are found.

Lando has been with us for barely three days now. We’ve had him to the vet and all seems to be well with his health. He got his flea/tick/heartworm medication, which is a must for all dogs from southern areas where these problems are greater than they are here. His foster brother, our dog Sammy Sam loves him (so far).

I understand how many dogs were left homeless when hurricanes hit. But how some, including our Sammy, also from the lower states, and now Lando end up in shelters baffles me. Both of these dogs are absolute delights. They are sweet, smart and so much fun to have around. The temptation is to keep Lando–I’m going to cry when he leaves, but I feel smaller, much more submissive Sammy needs another dog more his temperament and body type. Ultimately, it will be Sammy’s decision as to what dog, if any, finds a permanent home with us. For now, Lando will stay until the rescue is sure he’s ready to go to his forever home. And we are proud foster parents, loving every minute of the experience. 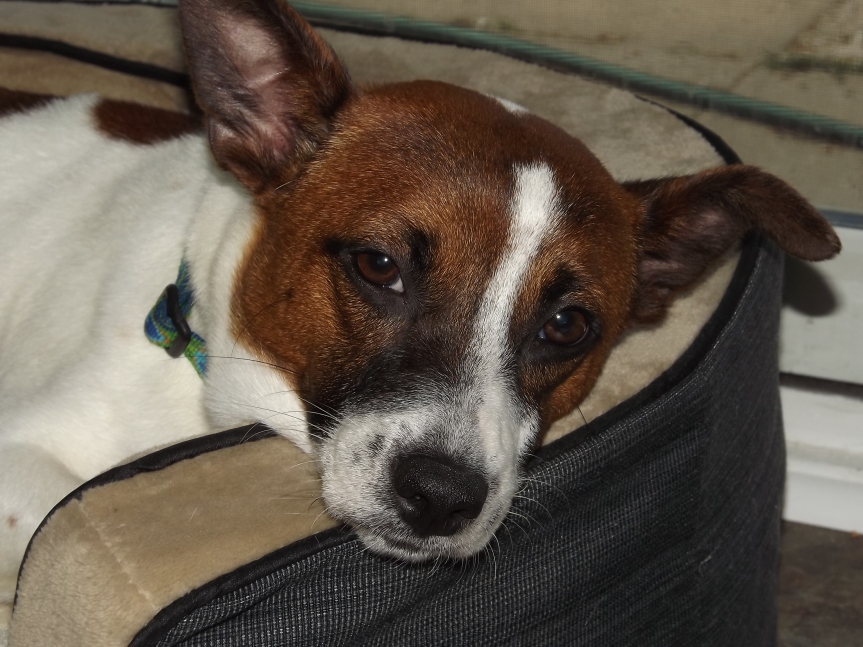 Whaaat?! It’s January 30th? How did that month go by so quickly? One month of winter down, who knows how many to go. It’s been mild enough that we have lost most of the snow that fell earlier on. It got bitterly cold, and then the temperatures shot up well above freezing. I didn’t even get out to skate on the little rink they built here in the village. Now the weather has turned again and winter clearly hasn’t gone away.

But, I have been busy, which is why the time has gone so fast. I’m doing less writing and more making. I recently completed the Burda Sewing Instructors Certification. So that meant sewing, sewing and sewing. I also realized my wardrobe was woefully lacking warm winter clothes. So I stocked up on fleece and made myself warm pajama pants, fleecy leggins and a few fleece tops. My favourite so far has been a hooded tunic from Burda pattern #101C. 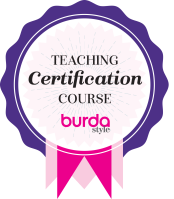 I’ve also been paper crafting a bit. Valentine’s Day is coming and I’ve decorated my Valentine’s twig. I was also asked to make a couple of cards. 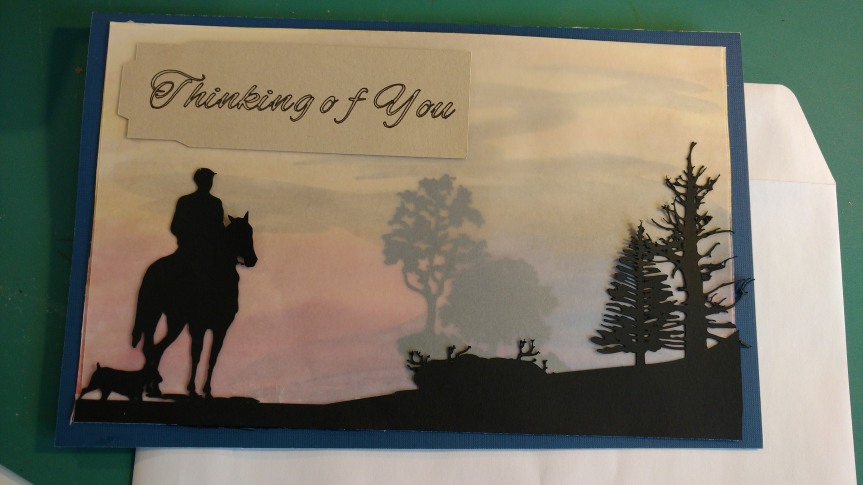 This card gave me a chance to try a watercolor technique I saw a long time ago using a simple wash for the background and then layering with vellum. I like the way it turned out although I’d cut the trees in the background differently next time so they don’t look like they’re on a cliff. 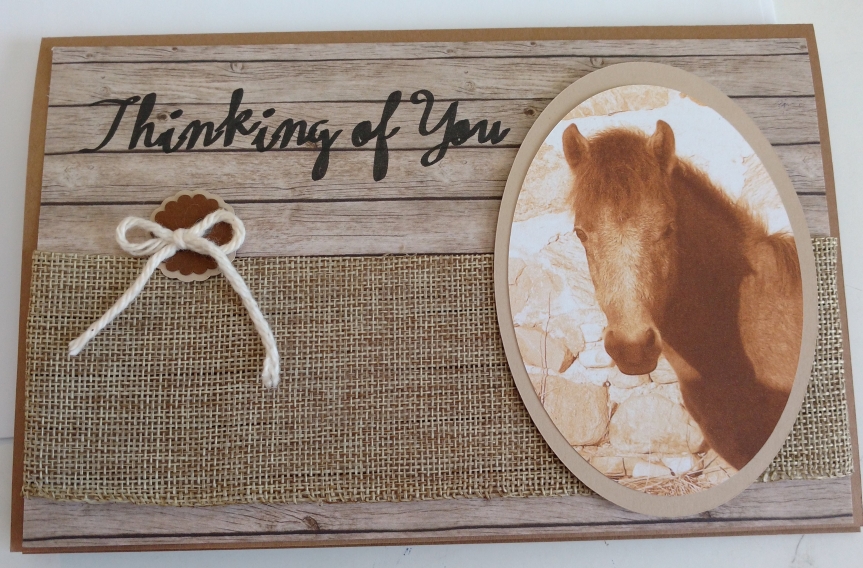 This was simple and fun to make and used up a bit of burlap ribbon I had. The picture is a photo I took several years ago and edited to for a sepia look.

On quite another track,  if you’re into planner stickers, here’s are some horse themed ones I came across by a talented maker named Victoria Thatcher. Check out her Horses stickers. She also shares lots of other great themes. I thought the whole planner sticker thing was silly and really resisted trying one out. But, now I’m mildly addicted. I’ve turned into a sticker and gold star kid again.

Sometimes I have a country moment. So I listen to a little Terri.

Happy New Year! I hope you had a wonderful Christmas and are looking forward to 2018. I’ve decided to abandon the news feeds, uninstall Facebook and Twitter apps from my phone, and concentrate on what’s important to me–making stuff. I have several ‘almost done’ sewing projects on the go. All are for the Burda Certified Instructor’s course I am taking.

But, I decided to take a quick break and sew up some socks. It’s winter and my feet are cold. And, because I am taller than average most “knee socks” come up to about mid-calf.  I haven’t mastered making socks on my knitting machine. So the Jalie pattern for stretch fleece socks looked like a sewn alternative.

This was an almost instant gratification project–less than an hour to cut and sew. The hardest part was finding the right textile. I was able to find 4-way stretch fabric on sale for $3 a meter–not the colors I’d like, but certainly suitable for my experiment with the Jalie sock pattern I purchased. I know it’s a little strange to become euphoric about socks, but I am over the moon about these. They were so simple to sew, and with a slight alteration of the pattern, I have knee socks that actually come up to my knee. I’m not sure how they’ll feel inside boots, as there are seams around the foot. But around the house, these will be perfect. As soon as my assignments are finished, I’ll be sewing more of these.

Let’s start the new year right. By joining a choir. I hope everyone else sings loud enough to drown me out. Happy New Year!

I recently bought the sheet music for this.

I like to plunk this out on my plinky old piano. From the movie White Christmas, a must-watch for me this time of year.

Every Monday for the last while, two adorable egg ladies deliver cartons of fresh brown eggs to my door. I wanted to give them a little something for Christmas, and my husband suggested change purses since they always seem to walk away with the money in their hands. Following this tutorial for triangle bags, I made these two purses up. I may have to make one for myself. 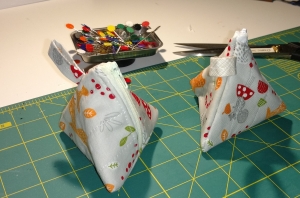 The Microscopic World of ME!

My world in randomness ...

Snippets from My Life

My Pursuit of daytrading/investing independence from the corporate grind. Topics include economy and current events.

A Different Perspective
Develop Your Power

Discover what makes you come alive!!

The Other Side of 55

The view's pretty good from this side!

A daily selection of the best content published on WordPress, collected for you by humans who love to read.

Restoring and renewing our rivers through poetry and wordflow.

Home of The All Natural and Organic Pierogi

Sharing my creativity one stitch at a time. Email me at yvettechilcott at yahoo dot ca

The Blog of Author Tim Ferriss

A Typical Blog. A Typical Woman. A Typical Take On Life. With An Atypical Twist!

Just another book junkie giving his two cents on the written word.

Undermining the Patriarchy Every Chance I Get. And I Get a Lot of Chances (Copyright Preserved)

my photographic life and other stories

Poetry and Other Intimacies

my soul echoes to all winds